The 40 hour work week (that’s standard here in Sweden, I’m aware it differs a bit) can’t be set in stone. We started with 8 hour days in the beginning of the last century, are we absolutely sure it’s the very best? We at Brath decided we wanted to try something else, we decided to go with 6 hour days.

There has been a lot of politicians talking about it but before us we don’t know of anyone in Sweden, or elsewhere for that matter, that changed to 6 hour days. There is a mechanical workshop in the south of Sweden that has done 6 hour shifts but that includes late nights and at least around here, if you work tougher hours you usually get a cut in the amount of them.

We’ve been used as a bat in the political debate lately and I’m not complaining about that, if top politicians in the country wants to spread the word about us they are welcome. It had no touch of political statement when we decided we wanted shorter days though, we did it because we believed it was a smart thing to do. We still believe that. Before I start going on about the benefits with shorter days let me adress a common misconception. A lot of commenters on articles about us claim that it can’t possible be a profitable way. 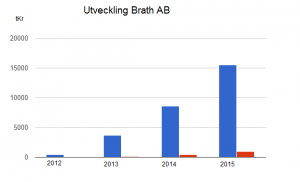 The chart above shows our revenue and profit is SEK, 1,9 MUSD is the last bar. I’m aware it’s not a massive company in any way but we have 20 employees and we have a healthy profit and growth. So far close to doubling revenue each year. We’re the fastest growing company in SEO in Sweden as far as I know. We’re not suffering in any way.

Some of the benefits with 6 hour days

From my perspective as owner, the real impact of our shorter days comes from the phenomenon that our competitors don’t have it. Hiring and keeping talent is if not the most so at least one of the most critical tasks for any growing company. We want to hire the right people and we want them to stay with us. While our competitors write that they have an inspiring workplace, play rooms or free sodas (or whatever it is that they write) we don’t even have to write ads. We’re well known in the industry (and in the rest of the country), partly due to our working hours.

We also believe that once you’ve gotten used to having time for the family, picking up the kids at day care, spending time training for a race or simply just cooking good food at home, you don’t want to lose that again. We believe that this is a good reason to stay with us and not only because of the actual impact longer hours would make in your life but for the reason behind our shorter days. That we have shorter days is not the main reason people stay with us, they are the symptom of the reason. The reason is that we actually care about our employees, we care enough to prioritize their time with the family, cooking or doing something else they love doing.

Another big benefit is that our employees produce more than similar companies do. We obviously measure this. It hasn’t happened by itself, we’ve been working on this from the start. Today we get more done in 6 hours than comparable companies do in 8. We believe it comes with the high level of creativity demanded in this line of work. We believe nobody can be creative and productive in 8 hours straight. 6 hours is more reasonable, even though we too, of course, check Facebook or the news at times.

A third huge reason for shorter days is that we all feel more rested. Obviously we too have to stay late at times, obviously we too are stressed at times but it’s from a better base line. Working late at our two offices often mean staying for 8 hours, or 7. Think about it, when mom comes home late, she comes home at 5.

Magnus is one of the world's most prominent search marketing specialists and primarily works with management and strategy at his agency Brath AB.

Can we be of help?

Good digital marketing is proven to be measurable and highly profitable. Fill out the form and we will get back to you within 48 hours to tell you how.

This websites uses cookies to provide our services. By using our services you accept our use of cookies. You can read more in our
SAVE & ACCEPT